Calling UK students to communicate with us! 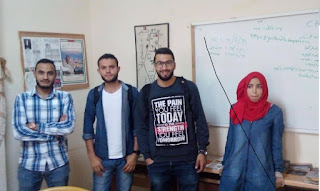 From a students' group at Dar Assadaqa, Abu Dis
(translated from the Arabic)

We are university students from Al Quds University have just joined the twinning club at Dar Assadaqa. We live in a very difficult situation and we don't think it can be the same situation in universities in other countries. We think it must be difficult to imagine the situation the Israeli occupation are putting us in, having to travel to university through military checkpoints and sometimes not being able to get there because we are stopped by the army who close streets, losing years of your life and studies because of being imprisoned by the Israeli army.

We are coming here but one of our colleagues who was meant to be with us, Osama al-Khateeb, a second-year student from the Law School, was arrested by the Israeli army at Jabaa checkpoint  yesterday army on his way to university.

Students don't just suffer when they are on the way to university but even when they are there, they can be attacked by the Israeli army at any time. When the army invades the university it is really difficult. They do a lot of destruction and damage inside the university. They throw tear gas and sound bombs everywhere, which causes injury among the students. Many students get hit by rubber bullets and even live ammunition.

We would like to send this message to the students in the UK, to give you a brief idea of what we are facing on a daily basis as university students in Palestine. We are sure that in your universities, you have issues and problems that you are suffering from - we would like to hear about your issues and to exchange information and to have meetings between us to allow us to know more about each other's  lives as students. As Palestinian university students, we believe that we are facing violations of our human rights which are illegal under international law, and we know that these are violations against the Universal Declaration of Human Rights. All these crimes against humanity should be faced up to. We hope that together we can make some change.