On 20th July 2015 Cadfa held a picnic on Hamstead Heath for all school children in the local area to attend in order to raise awareness about Palestine and encourage local participation in the kids visit from Palestine next year. 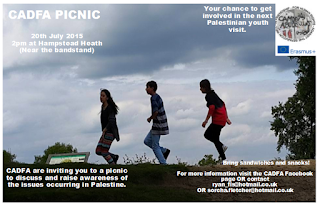 Roughly 20 school kids from Camden schools showed up for friendly conversation and in depth discussion of Palestine. Many of the school children were surprised to hear that Nadine, with an Israeli ID from West Jerusalem, and Momin, with a Palestinian ID from Ramallah in the West-Bank, although both Palestinian have completely different rights. An interesting illustration of this is that Nadine has the right to unrestricted travel throughout Israel and the West-Bank whereas Momin requires special permission from the Israeli Occupation Authorities even to travel within the West-Bank, which is not easily obtained. 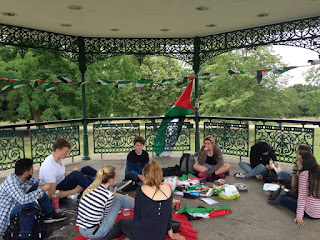 We hope that many who came were inspired to get involved for the benefit of the Palestinian people.
Posted by Dar Assadaqa at 04:20