The day began with a 9.30am meeting at Dar as-Sadaqah. We made our way to al-Quds University for a lecture about Palestine, the four main domains and the three proposed solutions. 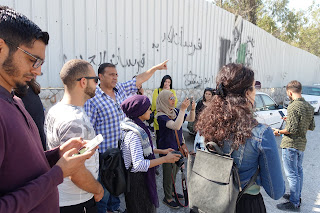 The lecture was interesting and was followed by an hour or so of questions and answers. We then took a lunch break until 1pm at which point we had a round-table discussion based on the lecture. Mutasem Al Nasr facilitated the debate focusing on increasing international pressure on the Israeli government. The topics ranged from social, political and economical pressure from grassroots movements up to lobbying MP's and local governments. Again, it was every interactive with lots of different ideas, views, questions and possible solutions being proposed.

Following this we got into taxis and made our way to Bethlehem which was a half an hour drive passing a checkpoint on the way. We asked our Palestinian guide if passing a checkpoint still made him nervous and he replied of course it did since they could be wrongly accused for no reason. The Israeli mistreatment is so deep-rooted that people in their mid-fifties still fear passing through checkpoints that they must pass on a daily business.

Upon arriving in Bethlehem, we made our way to the Church of Nativity where Jesus was born. The historical church was bombed in 2002 by Israeli F16 jet-fighters and is still undergoing reconstruction. The church is opposite a mosque and is an example of peaceful co-existence between Christian and Muslim Palestinians.

Following through the cobbled stoned streets in Bethleham we walked through the market, unfortunalty the market stalls were closed because of a strike, following a delayed release of a prisoner. As representative of Palestinian cities, the mosque stood opposite of the Church of the Nativity. Through the main roads another small town stood out on route called Beit Jarra. the road continued and the wall presented its ugliness. The wall increased and the road narrowed, there were derelict petrol stations and old sheds.

Banksys museum was set inside the Walled Off Hotel, on the corner of the wall adjacent to the Watchtower.